"A Civilian's Guide to the U.S. Military" was recommended by an Army captain in his Foreign Service Journal article!

From Army Captain Sean. P. Walsh: "I recommend you pick up a copy of Barbara Schading's "A Civilian's Guide to the U.S. Military" which provides an excellent, concise overview of the various branches of the military, its rank structure and some useful protocol..." Foreign Service Journal, February, 2009, pp. 27-29.

Preview nonfiction "A Civilian's Guide to the U.S. Military" and novels "Closure," "Disclosure" and "The Intentional Error" by clicking on "preview" download link in the left pane. 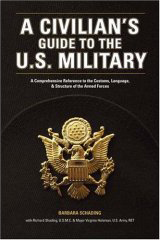 Click here to purchase this book from Barnes & Noble.com

A Civilian's Guide to the U.S. Military

"A Civilian's Guide to the U.S. Military" is a comprehensive introduction to each branch of the American military, their differing cultures and unique missions. It covers military rank structure, chain of command, protocol, special operations forces, call up to war procedure, Geneva Conventions, basic and slang terms and acronyms, adn many other aspects of the military realm - in plain English. Designed for military members, new recruits and their families, those writing and speaking about the military, and thinking civilians who just want to know.
Click here to read a review of "A Civilian's Guide to the U.S. Military"

Closure, n., a finish, end, conclusion, as in: Once obsessed over cold cases, Davis Fairfield is now a ghost who desperately seeks closure about his own death which only he and his killer know was not accidental. For Carey Sampson, her career will be finished unless she attains closure over the death of her friend and would-be lover Davis and is able to follow his investigative success. For the brother of a murdered woman and the parents of two missing coeds, closure is unattainable until their fates are known. For Detective Roy Moran, his mandate to protect Indian River County is jeopardized by the systematic murder of seemingly-unrelated women and he cannot rest until the killer is stopped. For retired FBI profiler Mick Kryszka, his rampant cancer races against his need for a final success over a serial killer whose personality, but not his identity, he alone can describe.

Closure, n., enclosure, that which confines, as in: The suffocating feeling Carey has as a killer comes closer to home, tightening his metaphorical noose around her neck as he gains a stranglehold on her life; the macabre, interminable trap Davis finds himself in, with only desperate hopes of peace–but never happiness–in his future.

Sequel to Closure. Still recovering from the realization that Davis was murdered, Carey continues work on his cold cases, focusing on a hit-and-run law clerk victim while she tries to keep her career alive. He returns at times in mirrors as she struggles to maintain her sanity.

The intentional error–the name for deliberate imperfections in an Oriental rug.
Simone and Kip Fairman, anonymous thriller authors, stumble into their character’s dark world of international intrigue while in London researching their next book, when they inadvertently purchase a rug containing instructions for a terrorist attack. Simone’s long-buried past reemerges as they are caught in the crossfire of terrorists and underworld thugs. The result is a crescendo of action, intrigue, mistrust and doubt that threatens their marriage, London’s peace–and their lives. 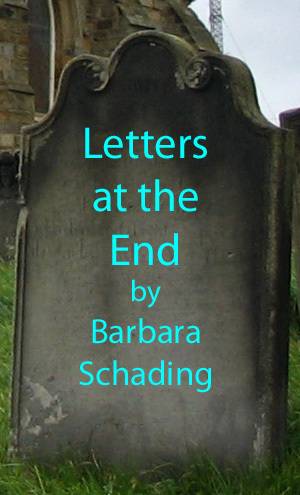 Letters at the End

Letters at the End

Margaret's letters are scathing and she pulls no punches whether she's writing to her deceased mother, family members, people from her childhood, and even to the doctor who prescribed this as an exercise. Will she die a bitter woman or possibly learn something from this process?

There are a million stories in the Naked City. This, unfortunately, is one of them. Fanny Flamingo is no featherhead, she's a tough old bird out to keep South Florida free of killers...if she lives that long. A novella written by 20+ members of the Florida Chapter of Mystery Writers of America. Their story appears in The Writer, June 2005.

"Your Healthy Garden," how to keep your vegetable garden free of disease, in Gardening How-To, July-August, 2000.

A Civilian's Guide to the U.S. Military
"...An indispensible introduction to the world's greatest military." W.E.B. Griffin, best-selling author of The Corps and other military series.

Closure
An inexperienced journalist assumes the inquiries of a recently-deceased investigative reporter who specialized in unsolved murders, unaware the dead man is a ghost who must solve his own murder.
Disclosure
Fraud in the legal industry and canine guards send Carey on a terrifying chase to right several terrible wrongs.
The Intentional Error
Co-authors of a thriller series with their own secrets to hide must assume their character’s super-sleuth qualities to survive when they inadvertently purchase a rug specifying a 911-like attack in London.
Letters at the End
Dying woman writes letters to people who've influenced her life.
But I Digress
Wacky chick lit tale of beachlife insanity!

Naked Came the Flamingo
"Move over Travis McGee. The Flamingo has Landed."